Did you ever think that it would be possible to run an eight-second quarter mile drag race in a factory Ford Mustang? Well, now you can, and we couldn’t be any more excited about it. The blue oval automaker has just unveiled an all-new 2016 Ford Mustang Cobra Jet, which is the first factory drag racer that is based off from the redesigned 2015 Mustang. There is already a ton of buzz surrounding this model from within the racing community. Therefore, we have decided to take a little time to tell you everything that you need to know about the new 2016 Ford Mustang Cobra Jet drag race car.

Ford recently shocked the world when they surprised us by unveiling a new factory drag race car called the 2016 Ford Mustang Cobra Jet. They officially unveiled this new ultra-performance pony car at the SEMA show in Las Vegas, and it stole the show.

What’s cool about this car it’s a drag race car with amazing power that still uses 75 percent production Mustang GT components. Most of the additional power comes from a massive Whipple front inlet supercharger. This car is fast enough to clock eight second quarter-mile runs and has so much power that the front wheels lift off the ground when you thromp down on the gas pedal.

According to Ford Performance Manager, Jesse Kershaw, “It was important to use production hardware wherever possible to ensure parts are readily available and reasonably priced for racers. The production parts are also incredibly durable in passing our rigourous dyno and drag strip testing.

According to Director of Ford Performance, Dave Pericak, “The modern Cobra Jet has performed for our customers and put Ford in the winner’s circle consistently since 2008. The new car is the first Cobra Jet built off the all-new 2015 Mustang, the only factory 2016 Mustang with a solid-axle rear suspension. We are excited to see it compete.”

This will surely be one of the most collectible Mustangs of all time because Ford is only going to produce 50 of them. They will be building this drag racing pony car at the Ford Flat Rock Assembly Plant, and delivery is expected in the first quarter of 2016. 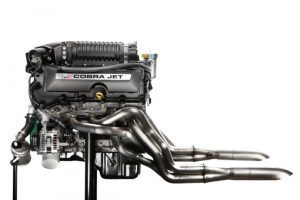 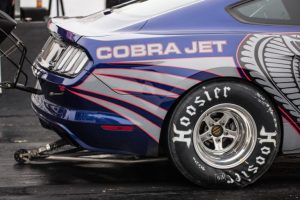