What are the Engine Options on the 2016 Ford Edge?

Engine Options on the 2016 Ford Edge

The Ford Edge is a mid-size five-seater crossover vehicle with a prodigious reputation. When Ford debuted the original Edge model at the Detroit Auto Show way back in 2006, it came out to a rave applause and gained instant notoriety within the automotive industry. Ford has continued to remain innovative and progressive with the Edge since then, and it has continued to grow in popularity as a result. One of the things that customers have always loved about the Edge is the level of customization that is available with it. This is especially true when it comes to powertrain options. Ford offers a variety of different powertrain options on the Edge so that they can appeal to all drivers, no matter what they are looking for. Therefore, we  wanted to take some time to highlight the different engine options on the 2016 Ford Edge in this article.

In most cases, you have either have to sacrifice great performance for good fuel economy. However, that is simply not the case with the all-new 2016 Ford Edge. The Edge truly offers the best of both worlds in regards to fuel economy and performance, no matter which engine option you choose. There are three unique engine options that are offered on the new 2016 Ford Edge, and we are going to tell you about all of them in this article. 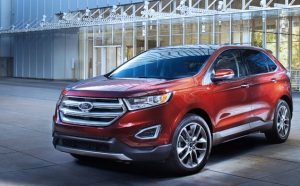 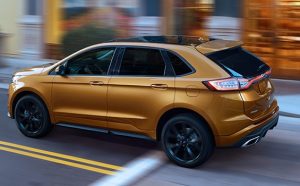 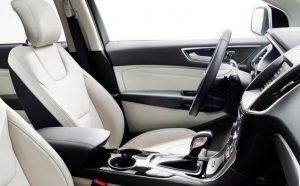 Ford is calling the new 2016 Edge more athletic, which is the perfect description for it. The base engine for this model is now a 2.0-liter EcoBoost V4 that has more than enough power to get you through traffic during your daily commute. This engine is able to produce 245 horsepower with 275 pound-feet of torque. It also gets an impressive fuel economy rating 20 miles per gallon in the city and 30 miles per gallon on the highway.

The middle of the road engine in the 2016 Ford Edge lineup is the 3.5-liter six-cylinder. This engine offers better performance than the base model with 380 horsepower, but not as much power as the engine in Ford Edge Sport. This 3.5-liter V6 engine also gets a very respectable fuel economy rating of 18 MPG in the city and 26 MPG on the highway.

The most powerful engine option is the 2.7-liter EcoBoost V6 that comes equipped on the 2016 Ford Edge Sport model. This powertrain boasts performance numbers that will even give seasoned drivers a thrill. It is able to produce 315 horsepower with 375 pound-feet of torque, which is a ton of power for a mid-size crossover. It also gets an EPA estimated 18 miles per gallon in the city and 27 mpg on the highway.

Anyone interested in taking a test drive in the new 2016 Ford Edge is encouraged to visit us here at Matt Ford. We think that you’ll be very impressed with this vehicle when you get behind the wheel and experience it for yourself. We look forward to hearing from you very soon.